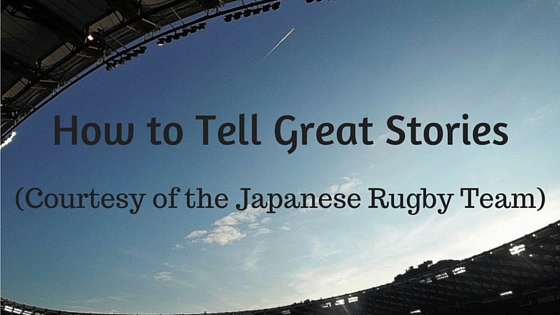 Yesterday I saw the best story of the year. It was better than any film, novel, or TV series I’ve seen in the last 12 months. And it all took place on the rugby pitch.

In case you’re not aware, there’s a small, little tournament known as the Rugby World Cup going on at the moment. And yesterday, in what has been called the biggest upset in the World Cup’s history, Japan beat South Africa, 34-32.  I could not have written a better story if I tried (Actually, I have tried, and you can read the first chapter here). I was sat on edge of my seat, screaming at the telly like a Banshee overdosed on caffeine. Supporters in the crowd were reduced to tears. How’s that for emotional resonance?

There were several factors that transformed what could have been just another rugby game into a tale that will be told for years to come. When we write a story, whether it’s for business or for fiction, isn’t that what we want? Something that’ll stick with readers? Something potential customers will never forget?

What can we learn from the game, and how can we implement it in our writing?

We love an underdog taking on impossible odds

Nobody expected Japan to be any real kind of opposition to South Africa. You could have made the South African’s play with one hand behind their back, and I’d still have put money on them winning. Japan were given odds of 66-1. They hadn’t won a World Cup game in 24 years. South Africa wasn’t there to win, they were there to destroy. This was a nice easy warm up game, a chance for them to flex their muscles and show that they were serious contenders for the World Cup. The only problem?

Somebody forgot to tell Japan.

They came out swinging, putting points on the board and never once acting like they were anything less than favourites. You could actually see the disbelief on South Africans face, as though they were the only ones with the decency to follow the script.

Lesson 1: Make your antagonist the favourite to win. The old adage is that ‘dog bites man’ isn’t news, but ‘man bites dog’? Now you’ve got a story. It’s the same for any good story. If it’s a foregone conclusion that your hero is going to win, readers will lose interest. On the other hand, if your readers can’t see how your hero can possibly survive? Then they’ll keep reading, just to find out what happens next.

Fight to the bitter end

Japan didn’t win the game in the first minute. They didn’t even win it in the 80th minute.  It was the last play of the game that won them the game.

They were still three points down when clock turned red. Throughout the game, the score was close, with Japan either holding onto the slimmest of leads or trying to catch up. Every time South Africa scored, Japan came back, but they had to fight throughout the game.

Compare this to the Ireland v Canada game earlier that day. Ireland were ahead 29-0 at half time, and went on to win the game 50-7. Well done Ireland, great win. But it didn’t make for a great story. It was like watching a Ferrari race a scooter. Impressive, but before half-time you knew how it was going to end.

Lesson 2: The ending should keep the readers guessing until the climax. Even if you’re setting up your underdog for a victory, wait until the last possible moment before it’s done. Chapter one is for setting up, definitely not the ending.

In dying moments of the game, Japan were denied a try. They were awarded a penalty, and had two choices: Take the easy kick for three points and a draw. Or go for the scrum, and risk it all for the chance of a win. Take the bird in the hand, or check out the chirping sound coming from that bush.

What would you do? A draw against South Africa would have been a good result for any team, let alone one as low in the rankings as Japan. The South Africans had the weight advantage, making the scrum even riskier. Any sane, normal person would have taken the draw and celebrated.

Instead, Japan bet the house on themselves and went for the jugular. In their minute-by-minute review, the Guardian described it perfectly:

Japan were offered a draw against the third best team in world and said “No thanks, we deserve better.”

Lesson 3: Your hero must be super-heroic. Sounds obvious, but when they’re faced with the tough decisions, they can’t just do what ever anyone else would do. They make the crazy, insane choice. They ignore the odds, and refuse to back down.

Maybe at the very start, maybe they can take the easy route. But when it comes down to the grand finale, your character can’t be cautious. They need to grab destiny by neck and refuse to let go.

The Japanese rugby team didn't just make history, they showed us how to tell breathtaking stories Click To Tweet

Have you got any examples where real life has trumped fiction? Share them in the comments below.