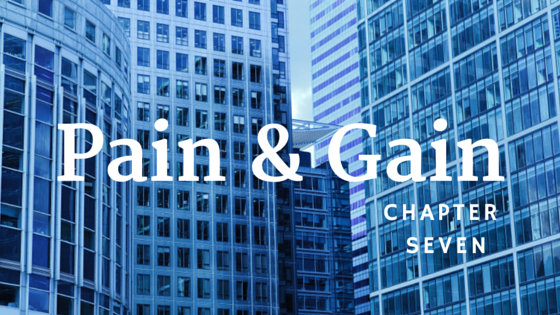 If you need to catch up on the story so far, check out the earlier chapters HERE.

“So you recognise him then?” Freya was smirking, her eyes mocking Eddie.

Taking a step back, Eddie held his hands up in the air, imploring the gods for patience. “Just please, cut it out. You win, I’ve signed your stupid confidentiality agreement, I’m working for you. Well done, let’s have a big round of applause.” He moved back to the table and took a seat. He took a deep breath, his next words spoken with exaggerated calmness. “What are you doing with a photograph of David Stone?”

Freya looked at him for a moment, her head tilted to the side. The whirring cogs inside were all but visible. Eventually she leaned forward, her hands steepled on the table. “The man in the photo and his whereabouts are of vital importance to this company. We want you to find him.”

Gritting his teeth, Eddie shook his head. “If this is your idea of a joke, I’m not laughing. You want to find David, try looking in Hackney cemetery.”

The smirk returned to Freya’s face, winding Eddie up further. “It’s not a joke Eddie. And despite what you may believe, I can assure you this man is very much alive and well.”

“Then you’ve made a mistake. I was there for David’s funeral. So whoever you’re looking for, it’s not him.”

“You’re the one who said that’s David Stone. I never mentioned any name. Maybe it’s you who’s made the mistake, maybe this is someone else.”

Eddie closed his eyes for a second, his fists clenching on the table. “I asked you to cut it out. I’m not a complete idiot. All that rubbish about hiring me for my ‘unique skillset.’ You think this man’s David Stone, and that’s why you wanted me on board so badly. You know damn well that I served with David.” He didn’t bother to add that there was no way they should have known that he and David had worked in the same unit. All that paperwork should have been sealed and stored in the bottom of some dark vault in some dark basement in some dark military outpost. But Eddie had a nasty suspicion that if he did say anything, Freya would just smirk more, and he wasn’t sure he could take that.

“Ah, bravo, well deduced. Yes, we have very good reason to believe that David Stone’s the person we need to find. Yes, you were hired because as far as we can tell, you were the closest thing to a friend he had.”

Eddie dropped his head, memories surfacing of that quiet autumn afternoon when they had cremated David. It had only been him, the priest, and the attendants there. The scripture had been read quickly, the final prayer muttered, and then it was just Eddie and the attendants. After David’s thirty four years on this planet, Eddie was the only one to show up, at least voluntarily. Even now, it struck Eddie as the saddest thing he’d heard. Not that there was only one person, but that it was him. As friends go, he hadn’t exactly been a good one. When he spoke again, his voice was just above a whisper.

“Okay. So you’re looking for David Stone, and you think I’m your best bet. What makes you think he’s still alive though? If you know half as much as you think you do, you’d know all about his death. Not exactly low profile.”

Freya nodded. “Take another look at the photo.”

Eddie obediently picked up the photo and examined it. The man was staring at the camera, his face devoid of any emotion. It certainly looked like David, in spite of the empty expression. “So, what am I looking for?”

“You agree that’s a photo of David Stone?”

“That photo was taken a fortnight ago. We’ve got bored tech guys downstairs who can narrow when a photo was taken to within an hour. All very impressive, but I take comfort in the fact they’re hopeless at parties.”

“How do you know it isn’t a twin or something? A look alike?”

“You know David didn’t have any brothers or sisters. Besides, we identified him with a biometric scan. 99.8% likelihood that it’s him. The next closest match was 48%.”

Eddie hadn’t actually known that David was an only child. It had never come up. Still, he saw no need to correct Freya.

Freya groaned, blue eyes rolling back. “Seriously? How much more evidence do you need?”

“Seriously? A lot more than one photo that you tell me is from a fortnight ago, or that’s been scanned, or whatever else you make up.” He paused, taking a deep breath. “He died. I saw him die. Hell, half the world saw him die. I’m pretty sure the zombie outbreak hasn’t started yet. So unless I see him with my own two eyes, in the flesh, you’re going to have to do a lot more to convince me.”

They looked at each other, locking eyes in a silent contest for a few eternal moments. Eventually Freya looked up to the ceiling and laughed. It was one of the world’s wonders, Eddie thought, that arrogance could make someone so beautiful look so ugly. “Look at it this way,” she said. We’ll pay you to prove us wrong. Prove that David is dead, and can’t possibly be the man we’re looking for. How about it?”

Eddie subconsciously tapped his pocket, feeling for a vial of Bliss that wasn’t there. He decided there were two possibilities. Either David was dead, and he’d get some cash to go with his ‘I told you so’ moment. Or somehow the impossible had happened, and David was still among the living. In which case Eddie owed him. Salve Ltd and Freya could keep their cash if they wanted, it wouldn’t matter, but if David was alive Eddie would find him.

“Suits me fine,” he said. “So you going to tell me why you’re looking for this man? Or do I have to guess?”

“David, this man, is in possession of Salve Ltd property.”

She said the words as though he’d walked off with a company pen, but Eddie figured he wasn’t being brought in to deal with stationary theft. “If I’m going to do this then I’m going to need a little more co-operation.”

“You’re being paid more than adequately,” said Freya, her voice climbing an octave. “Do you need me to do your job for you?”

Eddie leaned back in his seat, assessing the situation. Freya’s cheeks were flushed. Her hands had a slight tremble. The struggle was subtle, but it was there. “Easy there,” he said. “If this man does turn out to be David, he’s going to be hard to find. We’re talking a fragment of a needle in a whole lot of haystacks. And that would mean I’m going to need every last shred of information that might possibly help. Okay?”

Freya took a deep breath, her calm creeping back. “Of course.” She produced a manila folder from the desk and took out a photo, sliding it toward Eddie. “This is a photo taken this morning, the one we initially identified him from.”

The photo showed the David lookalike in an ill-fitting white coat, clutching a silver pilot case. The photo had caught him mid-stride, glancing up at the camera. The time-stamp was 4:36am. “It’s from a security camera, downstairs in our lab facility. He broke in then stole some materials from the lab.”

“Sounds like something the police should be dealing with.”

“We prefer to handle these kind of matters internally where possible.”

Eddie nodded, understanding her perfectly. “So whatever he stole is highly sensitive. Possibly illegal. And you don’t want to risk it going public. Or to the proper authorities.”

“I’m outraged you’d even suggest something like that.” Her voice suggested otherwise, as angry as Lionel Ritchie on a Sunday morning. “Salve Ltd are regularly audited by independent government inspectors. Everything carried out here is perfectly legitimate, and anyone who says otherwise is guilty of slander.”

“Of course. We all know that government inspectors are above reproach and have never acted in their own interest.”

“That being said,” she said, ignoring Eddie, “the intellectual property that was stolen is extremely valuable.” She sighed. “Bottom line is that there are a lot of companies that would be really interested to see what’s in that case. We’d lose a major advantage in the marketplace. That’s why we need someone on our side to find it first.”

“Don’t worry, if there’s one thing I understand, it’s capitalism. Supply and demand. You want me to track down this man and kindly convince him to hand over the materials.”

“And himself. We’d require Mr Stone for an interview.” The word was said like a euphemism, and her face didn’t bother trying to hide it. She might as well have said a session of ‘enhanced interrogation’ and some good old fashioned water-boarding. “We would need to make sure he hadn’t shared sensitive information with anyone else, that’s all.”

Eddie wasn’t sure if she was trying to convince him or herself.

“Of course,” she continued, “I wouldn’t expect him to come easily.”

“If he’s the same size as the David I knew, there’s a lot of him to persuade.”

“6ft 5” and 260lbs” said Freya with the scientific precision was no doubt an asset at Salve Ltd. “That’s what his file said anyway. Is that likely to be a problem?”

“You have a history of dealing with problems. More so than the average private eye. With your time in North Korea, you dealt with your fair share of violence, right alongside Mr Stone. I’m sure you’ll be able to deal with it.”

Eddie kept his poker face, although his stomach recoiled at the memory of North Korea. That final mission was more classified than their personnel files. Not even all the top brass in the SAS knew about about what had happened. A real ‘need to know’ basis. If word of that ever got out, the press would have a field day, with a picnic afterwards for good measure. Freya had said the words nonchalantly, but she might as well have used a hammer. He physically shuddered. ‘We know more than you think.’ He could hear Mr Toomes in his head, his thinly veiled warning whisper. ‘Don’t. Mess. With. Us.’

“So,” asked Eddie, keeping his voice calm, “you think this is going to get violent?”

“Yes.” Freya spoke without hesitation. “He is a very violent man. When Mr Stone left the site today, it wasn’t without injury.”

“And when can I talk to these someones?”

“Now’s not the time to be pulling that classified bull. Anything they saw, anything they heard could help me find him. The sooner I can talk to them the better.”

“Then you better get in touch with a psychic. They’re dead, Mr Walker. David Stone killed them.”

That’s all for this week. If you’re enjoying the story so far, please share it with your friends.